David and I became friends through geography. The move to Upper School was daunting and on the last day of our Middle School David stopped me in the corridor and said we should walk together on the first day. He asked if I would knock for him,  I said I would, and that was the last we saw of each other all summer until the new term. I knocked, his mum answered, and we were almost late due to David fumbling with his tie, worrying at his shoelaces, and stuffing marmalade toast in his mouth.

One Friday night, half way into term, David’s parents were going out and they suggested David rent a few movies and have me over for frozen pizza. He rented Fletch and Better of Dead, we watched the latter movie (and I immediately developed a hope to one day have a French girl kiss me and compliment me on my Language Lessons – it never happened but damn I still think she's lovely).

Before we put Fletch on talk shifted to a school disco that was coming soon. I’m gonna dance with Jodi – David was confident with girls. I’d seen that at middle school, he’d follow them around the dance floor relentlessly until they let him dance beside them. As soon as a slow song came on he’d launch like a hormonal St Bernard, mouth wide and tongue flailing. There’d be confusion, saliva and sometimes a slap. Inevitably he’d walk away puffed up and on a countdown to referring to the girl as a slag but assuring anyone who was listening that he’d tongued her.

Who you going to dance with?

Girls were still an alien and hostile species to me, Stephen King was safer. I knew they were there, I knew they could be spoken to and potentially convinced to remove their tops, but at the time I had a misguided certainty that Chinese food was involved and any conversation with a girl would lead to the purchase of fried rice and sweet and sour pork. I had no money so could not afford Chinese food. David was deeper in the hormone swamp and wasn’t shy of pocket money. He was hairier, he was sweatier, and he was fixated.

Uhm, no one. There’s no one I want to dance with.

Have you ever danced with a girl? David was grinning. I admitted that I had not.

It’s easy. He leapt from his chair and ran to the kitchen, coming back with a mop with a long red handle and a white head. He turned the mop upside down and held it in front of him. 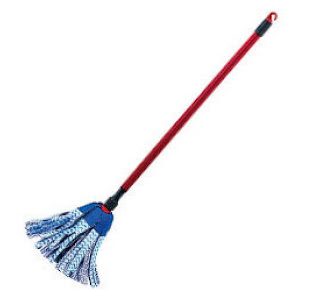 You just go up to the girl and say – Hey. He stared at the mop, smiled his Kiefer Sutherland smile, and said – Hey Jodi, d’you wanna dance? The Jodi-mop apparently wanted to dance. Soon he was circling with the mop and I was laughing. He guided me on small talk whilst humming Take my Breath Away.

Your hair looks nice – he said, flicking his fingers through the mop head before turning to me – Say something nice to them, girls love their hair.

You smell nice – he said, sniffing the mop. Girls love it if you tell them they smell nice, even though they all smell of Avon soap. I had no idea what Avon soap smelt like but made a mental note to find out. He carried on circling with the mop, guiding it around the lounge, eyes fixed firmly on it.

Ask them about school stuff, but nothing too much. Tell them that homework sucks and French is pointless, except kissing.

He cackled at his own joke and I flashed on the girl from Better Off Dead and her Language Lessons again.

You only have about 3 minutes so don’t talk much. You need to be kissing them by the last minute of the song.

He started bobbing his head back and forth, making lip-smacking sounds. His hips swayed and he seemed to peck at the mop head.

Then he said - D’you want to lick peanut butter off of my dick?

I was laughing so hard that it almost passed me by. There was a legend in school about a girl the year above us. She’d been at home with her boyfriend and had gone to get drinks from the kitchen. She’d come back into the room and he’d been nude with peanut butter spread on himself. The legend went no further than this but David was obsessed with it. Any time he saw the girl he would shout as PEANUT BUTTER as loud he could before running, red faced, in the opposite direction. The girl looked baffled each time, and I slowly realised that the legend wasn’t actually a legend but was a creation of David’s imagination.

He was still dancing with the mop but his disco chat was becoming darker. You like peanut butter don’t you? You want peanut butter? The mop didn’t respond that I could hear. How many times have you had peanut butter? The mop continued being a mop, unaware of David multiple meanings for peanut butter. It was swaying from side to side as David manoeuvred it. I was still laughing, but slightly less comfortably. David seemed to have forgotten I was there.

He pushed the mop against the back of the sofa and kicked the bottom towards him. He pressed himself to it and began to grind. I sat, uncertain what the best thing to do was, as David bore down on his mothers kitchen mop and kept calling it Jodi. The air was thick with the smell of detergent and David’s sweat. He buried his face in the strands. His ears were scarlet, his body wrapped tightly around the handle. There was a practiced intent in his movements; seemingly this was not the first time he and Jodi had danced.

With a sudden shout of Bitch he stopped moving.

I slipped out of the room and ducked into the kitchen. I ran the cold tap and filled a glass with water, not wanting it but wanting to appear busy. I heard him walk out of the lounge room and into the downstairs toilet. I went back to the lounge and saw the mop, laying discarded on the floor now. I heard the toilet flush and David run upstairs. He came down a few minutes later in different trousers.

Before he came in the lounge I heard him in the kitchen, raiding the cupboard. He appeared with cigarettes and held it out to me. I declined and he lit one himself, sinking into the armchair and hitting play on the remote to start Fletch. He said nothing for the first half of the movie and I just about managed to forget about the sexually abused mop, which still lay on the floor behind me.

The following week, walking to school, David told me that he’d pulled 4 legs from a spider and put it in his underpants at the weekend. He told me he’d stolen his neighbour Sally’s bra and asked me if I wanted to come and see it, I pictured it limp on the floor, as abused as his mothers mop.

Then he became fixated on the fact that farmers had sex with their sheep and started telling me where he knew there were sheep and a few goats. He had a plan he said, he’d made a list of what they would need. I knew somewhere on the list would be peanut butter.

The last day I walked in with him I knocked on his door and his mother answered as ever. She smiled at me and invited me in. She told me David would be down in a moment and went back to the kitchen where she was mopping the floor. She swished the mop from side to side, dunking it in the bucket and back to the floor again. I watched the mop move across the kitchen and heard Take My Breath Away in the back of my mind. I started wondering, could you, should you, with a mop? Would it, could it, be good?

David hammered down the stairs and as we left I said I think we should stop walking in together. He asked why and I made something up about homework and wanting to get into school earlier. Truth was I knew if I kept hanging around with him I’d be stuffing amputated spiders down my pants and mounting my mothers vacuum cleaner within the month.

He shrugged and said So what and for the rest of the walk we didn’t say a word and I tried not to think about his mop.