How did I die? 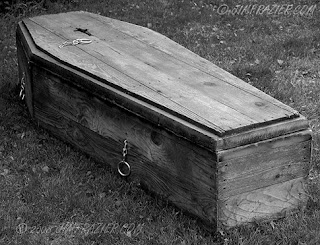 Bear - If I am ever a lifeguard, and you aren't already dead, I’ll try and pull you out of the water.

My daughter predicts my death several times a week. She comes to our room at 1am and either taps me on the head until I wake up or opens my eyelids with her fingers and stares at me.

A small child standing by your bed in the midnight hours is always terrifying and most nights I wake with a jolt and see the dark shadow of my daughter standing breathing beside me.

I had a nightmare.

Just try and go back to sleep darlin’

No Dad, I dreamt you died.

She then makes upset noises and I reassure her I am alive. I pull her into bed for a hug, she curls in and falls straight back to sleep.

Then without fail she kicks me in the groin.

In the morning I ask –

So how did I die last night darlin’?

She grins from the breakfast table and gives me my latest death. The list is now lengthy

With each scenario she mentions I make a mental note to be cautious just in case she is a five-year-old soothsayer. Should we go to the Reptile Park I keep a close watch on the crocodile enclosure in case it should break and the overly large child killing crocodile come rampaging towards me while my daughter giggles. I watch the ocean for sharks like Chief Brody and stay firmly on the sand while she throws sand bombs at me. I am careful crossing the road, I try not to catch fire or explode, I stay well away from snakes and exercise caution when on the toilet. Should I see a dog that looks likely to hit me I give it a wide berth. As for being shot, well there is only so much I can do to avoid that other than stay away from Nakatomi Plaza.

My sons’ death fixation does not relate to me dying, but is specifically related to the undead. He begs for details on zombies. Can zombies survive fire? Can zombies eat dogs? Do zombies ever catch the bus? Would a zombie swim or walk under water? Can Batman beat a zombie? I answer each question as best I can, prefacing it with “well, zombies don’t exist….but” and then launching into a lengthy scenario about Batman and a zombie having a tussle in Gotham City. The last zombie question I had from him was “Dad, can a zombie eat itself, what would happen when it swallowed the last bite?” I am still working on this one.

I took the kids to the local cemetery when Bear was 3 and Toes around the one-year mark. Bear had been asking to go for ages, pointing to it and telling me he wanted to see where the dead lived. We were short of anything to do that day I hiked them up the hill, Bear on my shoulders and Toes in the pram. It was a blistering Australian day and by the time we reached the gates I was dripping sweat and breathless. Bear ran gleefully towards the graves, Toes bumbled along.

Bear stopped suddenly and turned to me.

Where are the dead people?

Underground, they are buried.

Can we go and get a shovel?

On that same trip he asked me

Dad, why do people die?

I took a deep breath and gave it my best shot.

People get old. Once they have done everything, eaten every meal, had every beer, seen every movie and read every book they die. They fall asleep and don't wake up.

Da was my wife’s grandfather; he died when Bear was two.

Yes mate, he was very old. But he was in hospital where they care for people, he was comfortable and you gave him a kiss goodbye.

Fish was Bears very originally named pet fish. The fish died, most likely of over feeding. He has a new fish now, when he first got it he wanted to call it Fishy. It’s a fighting fish so the name was toughened up to Demon-Fish.

Bear gave the beach a distant look, like Heathcliffe on the moors. He seemed to weigh up mans mortality, to consider the brief shining life we lead before we wink out and leave only love and memories.

He turned back at me.

Can I have an ice cream?

Toes has seen her pet mouse die, she’s fascinated by deceased pigeons on the side or the road and she giggled when she saw a fish chopped into pieces by a fisherman and thrown back into the water, mouth gasping on its severed head. .

She tells me there is a ghost of an old lady in her room who hates her. This gives me chills. Sometimes she points to the corner of the room and assures me someone is standing there.

I tucked her in the other night, sung her a lullaby, kissed her and asked her to try not to dream my death tonight.

I know I am reaping what I have sewn, having raised two happy little goth kids and I love my demon kids. So saying, it would be nice to live through the night for a change.

An ex girlfriend, before she was an ex, asked me– If you died, would you mind if I dated your housemate?
Posted by Atheist Dad at 02:29 No comments: