The same thing happens nigh on every day. I get on the bus and sit with my book and the bus then winds its way along, slowly filling to the point where people start begrudgingly taking the aisle seats and sitting beside the person in the window seat.
I glance up and see three or four seats left including the one beside me. I glance up again a few stops later and see every seat on the bus taken except the one beside me, there are people standing, there are people muttering, and an empty seat beside me.

Sooner or later one lone traveller will shuffle and “excuse me” their way up and take the seat beside me and I find myself wondering what exactly it is that keeps these people at bay? I have my shirt and tie on, my hair neatly gelled , my Kindle doesn’t reveal that I am reading anything disturbing, I even have a nice lemony Armani scent, so why does no one want to sit by me?
I have come to the conclusion that, despite what my daughter tells me, I am simply not cool. I drag down the bus vibe of undercut hair, too tight trousers and iPhones. I sour their Vitamin and Nutrient Water with my grey-flecked beard and crows feet.
This baffled me as I was cool once, I was on the edge, I was at the height of a movement before it was even a movement.
I was in a Breakdance Crew.
(Wavy lines and a tumbling sensation, oh yeah, we are going down the flash back tunnel again).
Break dance was phenomenon in the early 1980’s and during the school holidays of '82 I had visions of myself with mismatched fluoro socks, stubble on my face and the attitude in my eye of Turbo and O-Zone. 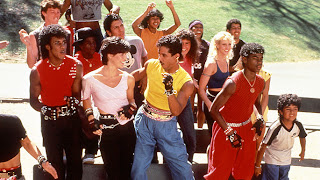 I devoted very small amounts of time to trying to body pop, focussing on certain show stopping moves. In my 8 year old mind I was approaching event horizon of being able to break dance by simply thinking about break dancing now and then.
One of my neighbours, Karl, was a confirmed break-dancer. He had a shark tooth ear ring, muscle t shirt and a small cassette player with 3 break-dance tunes recorded five or six times. He had moves and skills and as such a “crew” naturally formed around him, especially also as he was ten and we were eight.
Being in his crew meant we followed him wherever he went and heckled anyone foolish enough to start a “beef” with him. We were fiercely territorial so the crew from the neighbouring street were our sworn enemies.
Karl would show his moves in the playing field and the crew from the next street would appear on the (ungraffiti’d) walls were they sat cat calling. As was our job we heckled back, declaring their dancer rubbish and we traded insults long enough that they demanded a “burn out.” This was a mythical concept; two dancers facing off until one broke from the inability to complete a special move. To loose a burn out could lead to tears, limbs could break from over extension and hospitalisation could very well follow. So saying, none of us had been to one though Karl had recounted a victory he had had in a burn out in a neighbouring and rougher town as the sun glinted on his sharks tooth ear ring.
Given the escalating drama of the moment nothing could happen there and then, Karl could not immediately break into a carefully choreographed routine. A time and place had to be determined. It couldn’t be in the park; parents may see and interrupt the precision dancing with shouts of dinner time. It had to be somewhere we weren’t supposed to be, and it had to be in the evening. We opted for the car park in the market square of town because it had a dumpster and that gave it an urban vibe and we chose 6pm because the street lights would be on. It was on, word went out about the burn out, people would come and witness this and I would be ring-side as part of Karl’s Crew.
We rushed back to Karl’s place to help him work out what to wear and spent the afternoon listening to the same tunes while Karl got dressed (tennis headband, ear ring, white trainers, baggy trousers and t shirt) and his mum bought us Lemon cordial and ginger biscuits.
We managed to convince our parents to let us out after dinner on the strict understanding we would be home for 7pm. With stomach battle ready and filled with fish fingers or frozen beef burgers we regrouped and ducked and dodged our way to town. Karl planted his cassette player down and we scowled and sneered. In my memory of this I am chewing on a matchstick though I doubt that was genuinely the case.
Karl broke into an epileptic warm up of half moves that suggested the raw talent he was just barely holding back and we all felt the electricity of the impending burn out. There was danger and music in the air, and our parents would never understand the necessity of this moment, the vital territorial tribal ritual that was about to be performed to Chaka Khan and the Rock Steady Crew. Adults just wouldn’t or couldn’t understand…and evidently neither did the other crew as they never turned up.
By 6.20pm we knew they weren’t coming. Karl was still windmilling his arms and checking his ear ring but by 6.30pm the manager of the chemist came out and told us to move on in and in a precursor to the Criminal Justice Act he told us we should turn that music off.
Not down, off.
We took the long way home, strutted through the neighbouring street looking for trouble, armed with imagined flick knives and broken bottles. No trouble came, though one of us did step in dog mess.
Back at our street with 20 minutes before curfew Karl pressed play on his cassette deck and Chaka Khan started singing at a sensibly low volume. He did a few moves and then spent a while psyching himself up to do a swan dive and lead into a caterpillar.
Having spent a good 12 minutes that summer practising I had a belief that I could do each move. Karl completed the swan dive caterpillar combo while the other kids twitched and jerked.

Figuring this was my moment I launched into a graceful swan dive and encountered the terrible moment where ambition collides with inability. My arms buckled and my face planted firmly on the concrete and my legs went over my head as I crumpled.
I stood and wiped a small trickle of blood from my cheek as sniggers started but Karl silenced them with one clenched 10 year old fist.
“Least he tried” he said and as my heart swelled as he added an uncertain “Yo!”
One by one they launched into swan dives and crumpled until ten minutes later they were all wincing and rubbing sore points on their faces. Karl executed one more perfect dive and the front doors started opening on our street as our parents called us home.
I ran indoors and my mum asked how I had scratched my face, had I been fighting?
“Nah Mum, dancing” I said, leaving my street persona at the door as I raced upstairs for a Sunday night Matey Bubble Bath.
Under my beard a small scar from my dance days likely remains.
And in my heart still burns the unchecked heat of the burn out.
If no one sits next to me on my next commute I am going to stand and scream out “Hey, you, the bus commute crew, show me what you do make a break make a move” and then I’ll caterpillar my way up the aisle and do the robot all the way to work.
‘Cause I could you know.
Cool is in my blood.
Yo